skip to main | skip to sidebar


Robert Tang and Beverley Cayton-Tang are no strangers to taking risks.

Long before “Dancing with the Stars” and “So You Think You Can Dance” made dancing a national viewing past time, Robert and Beverley were making their mark as 3-time Canadian and 2-time North American Amateur Standard Ballroom Champions. But their journey wasn’t always as glamorous as the crystal-adorned gowns that Beverley wore, nor as fun as what they expected when they went out on the dance floor to defend their titles.

Remarked Beverley, “When we first decided to compete together, I was already the Provincial Champion, and ranked third in Canada with my former partner. My coach had suggested Robert, whom she felt had a lot of potential. The challenge was that he had been taking lessons for only a very short time and had not yet competed at a Championship level. It would be like starting all over again.”
For Robert, there was the added pressure of having to play catch up, and uncertainty as to how a traditional judging community would react to a “mixed-race” dance team. “This was during the mid to late 1990s. Of course, it did help that I had a secret crush on Beverley,” he added, “so this motivated me to work harder to not disappoint her, nor our coach.”
Originally from Malaysia, Robert, his sister and parents immigrated to Canada during the late 1960s to escape from the political issues in their country at the time. Robert’s father was a Ballroom Champion in his youth, and decided to revisit his passion by taking lessons in Waterdown, Ontario. “When my parents decided to compete for the first time together at a competition in Kitchener, my sister and I decided to go to the event and cheer them on. It was there that I was introduced to Beverley and you could say, quickly became her ‘secret admirer’,” stated Robert.
For someone who has had to battle chronic shyness and dyslexia throughout his youth and adult life, Robert discovered a way to cope with those challenges through competitive Ballroom Dancing. “When my voice wouldn’t naturally say what my brain wanted, dancing was ideal for me because I could communicate non-verbally through facial expression and body movement. And the skill of leading a partner around the floor made it similar to a game of chess, so it provided a fun way to challenge my mind,” laughed Robert.

Their hard work and risk-taking started to pay off, and ultimately resulted in their becoming Canadian and North American title holders. They represented Canada at five World Championships, competing in Denmark, Holland, Austria, Germany, and Japan.
Although their Amateur Sports Association provided bursaries as the official Canadian representatives, they still needed “day jobs” to support their dance addiction. Robert was a Marketing-Communications Manager for a manufacturing software company based in Boston, while Beverley was a Manager of Interlibrary Loans for the Southern Ontario Library Service based in Toronto.
In 2001, with the financial support of an Angel Investor from Seattle, they quit their jobs and began a new chapter of their lives as entrepreneurs. The Tangs launched www.dancescape.TV where people could view dance videos on the Internet (long before YouTube), and www.dancescape.com, a source of world-wide news and event information and online shopping for dance supplies and services. In the evenings, the Tangs coached competitive dance couples at their downtown Burlington location.

Earlier this year, CBC Television heard about the Tangs and decided to profile them on their new show, “Fortune Hunters”, which focuses on entrepreneurs who are in unique industries or are cashing in on new trends. Their episode can still be viewed online at www.cbc.ca/news/fortunehunters.
When the producers heard that the Tangs were seeking to expand their company nationally and needed investment growth funding to do this, they invited them to try out for “Dragons’ Den” and pitch their company to a panel of tough Canadian business moguls.
Stated Robert, “This was among the biggest challenges that we’ve taken to date – to put ourselves on the line, in front of a panel of ‘Dragons’ on national television. At times we had to draw upon our past competition experience to face their wrath. But we felt that no matter what happened, it was the opportunity of a lifetime to tell our story to the investment community and national media.”
The exciting news is that their 2-disc instructional DVD, “For Absolute Beginners Ballroom Dancing” will be sold in Canada on www.shopdragonsden.com, with a portion of proceeds going to breast cancer support services.
And in January, the Tangs will be launching a Teacher Training program that will enable those who are passionate about dance to join the danceScape team and teach others how to gain confidence, be fit, and have fun through their dance learning and party programs.
Will Robert and Beverley slay the Dragons' Two Left feet, or will they be scorched by the fire? Tune in to CBC Television (segment originally aired November 2008, but recently aired again in July 2012). 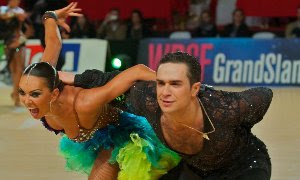 The World DanceSport Federation is offering interested organisations the opportunity to respond to an Invitation to Tender (ITT) for the purchase of the worldwide media rights to the WDSF GrandSlam Series Standard and Latin from 2013 to 2017.
The WDSF GrandSlam Series brings together the best DanceSport athletes to compete in five qualifying events and the Final, and through the qualifying system guarantees spectacular competition.
The venues chosen for the six events over the next five years are
All dates are fixed within the WDSF calendar 2013 - 2017.
WDSF seeks to increase the awareness and popularity of DanceSport, which has become an important leisure activity. By increasing the exposure in those countries where the sport is little known, WDSF will create greater awareness of the value of bringing together physical effort, artistry and music.
Advances in technology and opportunities to exploit new means of distribution to the viewing public will be an important part of exploiting the rights and helping WDSF achieve its goals.
WDSF will analyse all replies to the ITT that are received and will make a shortlist of applicants who will be invited to present their proposal in more detail. WDSF will then decide which applicant(s) will be selected as its contractual partner(s) for the exploitation of the rights.
The Invitation to Tender document can be obtained from:
Lukas Hinder, WDSF First Vice-President by e-mail at lukas.hinder@bluewin.ch or
Richard Bunn, WDSF Media Adviser by e-mail at rb@rbinetwork.ch
* * *
For further information please contact:
Richard Bunn, WDSF Media Adviser, by e-mail or telephone +41227381291 or +41792033731
Posted by Ithaca Night Life, NY at 8:01 AM No comments: Dance competitions are developed to match the personal skills and measure the dance development of each couple competing with other simiarly ranked couples. It is here where each of us learn more about ourselves, as well as our fellow teachers.

In truth it is a real test in personal character. And thats the heart of it.

What everyone has immediately became aware during their first experience at a dance competition is the excellence of the people who are involved. The social and cultural atmosphere is very much like dance heaven, and those of us who have experienced this a number of times are hooked. For some very good reasons too.

It is here, in the test of competing with others, and cognition what you are competing in, Ballroom Dance , that the true issue of " how you are measured " to prevailing dance standards you are being judged by. And it is here where the preparation, sociocultural perceptions, and time invested clearly comes to full view of your, our, fellow dancers.

Thus the quality of the people themselves and the sociocultural atmosphere they, we, produce is what most of us have been looking for since the age of 8. A dream world of goodness and futuristic happiness.This is what is being offered. The Ithaca Dance Directory is now open to all dance troupes and dance concerns with the Central New York Region of Ithaca / Tompkins County. This means ballet, modern dance, as well as cheerleaders all the way to folkdancing. Its all included.

With this in mind, Mr Christian went on to add to this discovery by likewise creating The Ithaca Fashions Directory, as well as The Ithaca Sports Directory all having the same results.
Posted by Ithaca Night Life, NY at 12:16 PM 1 comment: From a Family Diary ( Condensed ): The social event of the year for all Southern young ladies and gentlemen of Atlanta, Georgia, The Debutant Cotillion Ball at The Grand Peach Street Ballroom. This was my first during the year of " Our Lord " 1895 for the Month and Day of June 1st.
The grand and splendid event was filled with the Young Gentry - Escorts and their Ladies who during the year turned 16 in our time of American Innosence ( as we call it ). I remember well the ballroom dance class at my finishing school at Jonesbourg. Here Dance Master Irving Greene gave strict instructions during each Ballroom Dance Class. Ladies should always exhibit " demure " during the time in which your escorts help you to fill your dance cards. All to the well too. As here you are more than likely to meet your future bow and spouse. Moreover, and as Dance Master Greene pointed out during each interval of the dance class, once you are in the grips of the dance you must show off your spirited regellia of grit and femine graces.
Yes. He was Right. For I saw who I wanted to be my future husban, number 10 on my dance card, and his wonderful name is Steven Christian. Beatrice Smith who did become Beatrice Smith Christian.

This is the description blog of what goes on in Ballroom Dance Class /Classes in Ithaca and else-where.
First the Romance of Ballroom Dance: Ballroom dancing a time ago was swept in complete gentleness of culture of refinement, deep purpose, and literary greatness, where tea was the latest craz, and gossip hop'ed from one drawing room to another. The dress worth a fortune, and the men lavished the women they loved with expensive jewels, which if some one would total the national collection of American citizens inventory, it could purchase the entire city of Paris outright. The floors clean, and the shoes stepped lively to every tune with grace and posse to envy of any princess and prince. This was " the " time, and the air that swirl about, you knew Ballroom Dance was at it's height of greatness.
Posted by Ithaca Night Life, NY at 9:47 AM 1 comment:

Ballroom Class: Both the Dance and the Class associated with its participants.